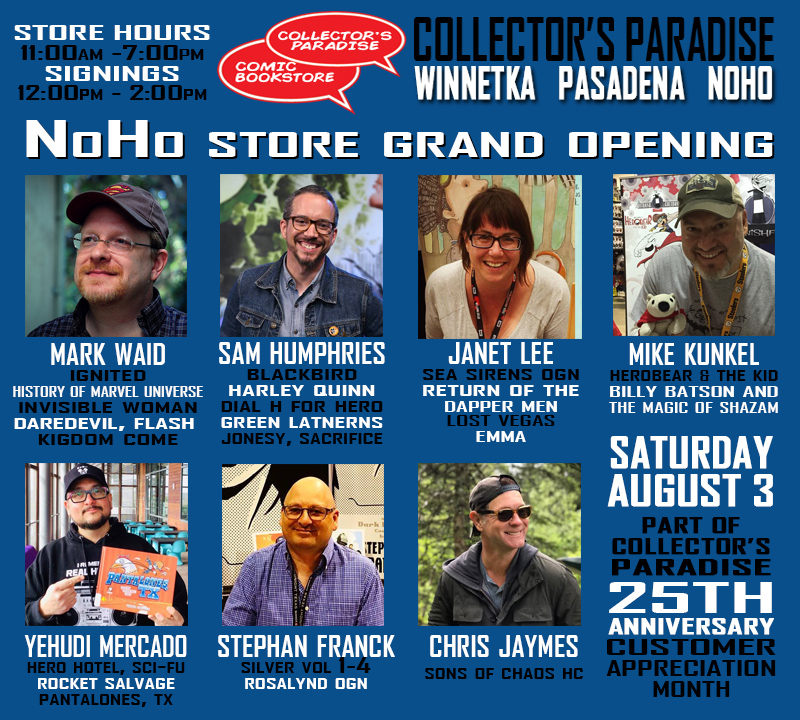 While Collector’s Paradise’ newest branch in NoHo will actually open on Wednesday, July 31st, for New Comic Books Wednesday, we will officially launch on Saturday, August 3rd with a Grand Opening Celebration, featuring a signing event from 12-2 with some amazing creator friends. We will have some beverages and there may even be an appearance by a certain superhero that is known to frequent Collector’s Paradise events.

This event is also a HUGE part of our CUSTOMER APPRECIATION MONTH that starts on August 1. Check out posts in this Event with more info on that.

Mark Waid – Mark has been a friend to Collector’s Paradise stores since early days of Free Comic Book Day. His newest series for Humanoids, IGNITED just came out, as well as some great Marvel projects, including Invisible Woman and this week’s History of Marvel Universe. He’s also one of the most prolific Marvel & DC writers with classic runs on Flash, Daredevil, Captain America, FF, as well as classic limited series Kingdom Come and Superman: Birthright, and his own Irredeemable and Incorruptible from BOOM! Studios.

Sam Humphries – Sam has come a long way from a comic about a cop who is in love with his dog, to writing amazing comics for both Marvel & DC, including Nightwing, Harley Quinn, Green Lanterns. His own creator owned series Blackbird is one of our consistently best sellers and his newest DC series, Dial H for Hero should be read by everyone who loves fun comics.

Janet Lee – artist on the Eisner-award winning book Return of the Dapper Men and Lost Vegas (both with the always awesome Jim McCann) and Marvel’s EMMA series, and the brand new stunning young adult graphic novel, SEA SIRENS, which comes out this week.

Mike Kunkel is best known for the incredible and innovative self-published (and later republished by BOOM! Studios) HEROBEAR & THE KID, a stunning book about a boy and his toy bear. Mike’s Billy Batson & The Magic of SHAZAM is still IMHO one of the best kid’s comics DC ever produced (and needs to reprint!!!)

Yehudi Mercado creates some of the coolest looking kids and young adult material on the market. His super fun and creative art style jumps off the pages and is impossible to resist. Just look at SCI FU (a book about Science and martial arts, common) or HERO HOTEL, ROCKET SALVAGE or any of his other stuff. Kids adore Yehudi’s stuff so if you have a young one, (or you enjoy cool hip comics) he’s your guy.

Stephan Franck does one thing in comics but he does it SOOOOO Well. His series, SILVER, which he self-publishes, is one of my personal favorite books in recent times. Imagine “Ocean’s Eleven” with Vampires. Vampires are hurt by silver, so they hoard it inside a mountain in Transylvania. A group of adventurers and thieves go on a quest to steal the silver from the vampires. As you can imagine there are complications. IT’s SOOOO addictive. BUY IT!!!

I have not known Chris Jaymes for a long time, but the first time I heard him speak, he was so funny, I HAD to meet him. He’s putting out a very personal book, and the passion he has for this project makes 1000% of the difference in how amazing it is. SONS OF CHAOS is a stunning Hardcover GN that chronicles the story of the Greek struggle for freedom from the Ottoman empire. Imagine Frank Miller’s 300 set in 1821 Greece. Amazing art, the second I saw it I knew we had to do something with this book.