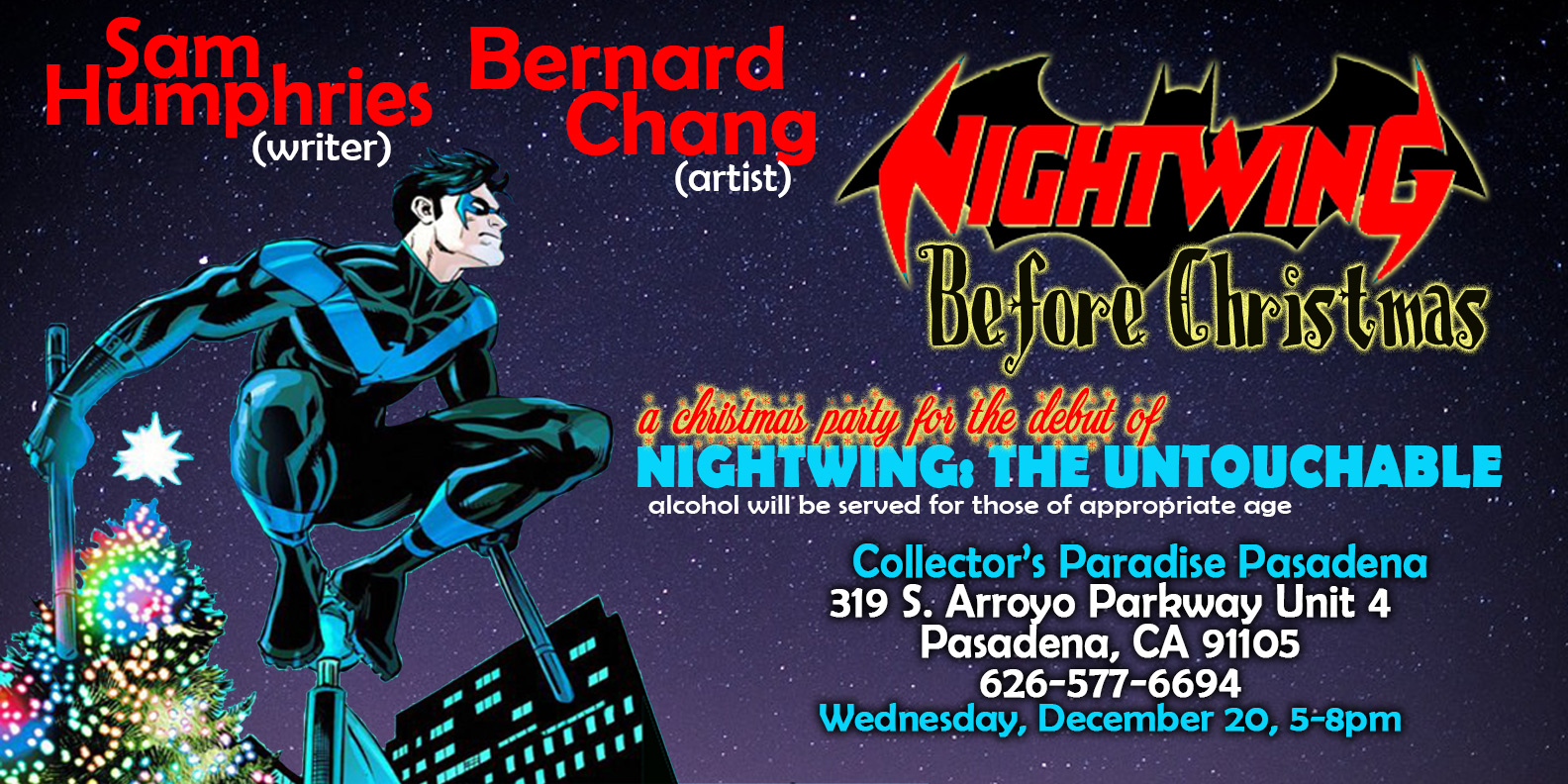 Collector’s Paradise – Pasadena cordially invites you to a Christmas Party featuring NIGHTWING THE UNTOUCHABLE with creative team, Sam Humphries and Bernard Chang. Alcohol and other drinks and snacks will be served to those who are 21 and over and NIGHTWING costumes and attire is allowed AND encouraged!

UPDATED INFORMATION ON OUR EVENT:

FIRST 35 Customers who buy Nightwing #35 (get it?) at the event ONLY, will get a limited Signed and Numbered print (35 made) by Bernard & Sam. Come early if you would like one of these prints.

BERNARD CHANG will do 12 sketches, 3 of which will be Raffle Sketches for anyone who buys Nightwing #35 at the event ONLY (you have to be at the party to be entered) or participates in the Photo Frame Raffle (below) and the rest for anyone who comes wearing NIGHTWING Gear or Cosplay.

GIANT HOLIDAY PHOTO FRAME – Take a photo of yourself with Sam & Bernard and share it on SOCIAL MEDIA using the hashtags we will provide at the table for a change to win a cool prize we will announce later. If you tag us, we will see it. Each tag on either Twitter, Facebook or Instagram counts as a Raffle Entry.

All ART from NIGHTWING #35 will be on display at the signing. See the art before it got colored.

‘THE UNTOUCHABLE: HUNTERS!’ Nightwing finally feels like he’s got his life in Blüdhaven under control. But the one thing he wasn’t expecting was for a case from his past in Gotham City to rear its head here-a murderer he never set eyes on, but whose unmistakable signature has arrived in his new city! How many people will die before he’s stopped this time? Or worse than that…what if Dick can’t stop him? Incoming creative team Sam Humphries and Bernard Chang kick off a story that will take Nightwing back to his days as Robin and force him to question his future as well!