You are here: Home › AVENGERS vs X-MEN (AvX) LAUNCH PARTY!!!

More than 1,100 comic shops around the world will host launch parties April 3 for Avengers VS X-Men, Marvel’s 12-issue bout between Earth’s Mightiest Heroes and its uncanniest mutants. And you bet your Vibranium-metal shield and ruby quartz visor those parties include both Collector’s Paradise shops.  Participating retailers will sell Avengers VS X-Men No. 1 a day early on April 3, with the stipulation those shops stand with the Avengers or the X-Men and offer appropriate giveaways depending on their choice. Well we’ll be giving you both choices. You will still have to pick a side but you will be able to choose your side at each store.

AvX swag includes exclusive buttons, lithographs, mini-posters and variants. There’s also a blank variant AvX No. 1 so you can doodle your own cover heroes or maybe get an artist to draw some for you.

So what has Captain America and the Avengers butting masked heads with Cyclops and the X-Men anyway? At the heart of AvX is the all-powerful Phoenix Force, a cosmic entity that’s blazing its way to Earth to join with a young mutant named Hope. Cyclops considers this a chance to literally rekindle a near-extinct mutant race, while Cap regards it a clear and present danger to all life on the planet.

Marvel says only one side will win in this clash of fists and philosophies. So far it looks like the reader wins given all the creative talent involved, which includes writers Brian Bendis, Jason Aaron and Matt Fraction and artists John Romita Jr., Adam Kubert and Olivier Coipel. 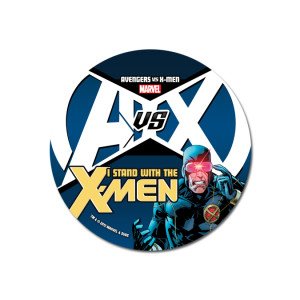