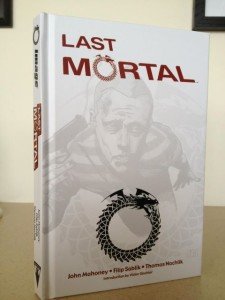 On March 14, from 5pm to 8pm, we’ll be having a Release Signing for LAST MORTAL HC with co-creator and writer, Filip Sablik. We helped release the first issue of the series, during which Filip got a tattoo of the series logo on his back (ask him to show it off) so it just seems “right” that we help release the awesome Hardcover edition of the book.

REVENGE NEVER DIES!
Alec King is a small time thief & con man who has always run away from responsibility. When he and his partner get in over their heads after being blackmailed into becoming hitmen and his partner is killed in the process, Alec tries to escape one last time. Alec attempts to take his own life, only to discover he cannot die. What would you do if you had nowhere left to run?

Collecting the hard-hitting noir tale of revenge from Minotaur Press, this hard cover not only offers the complete series, but a wealth of behind-the-scenes bonus material including a complete cover gallery, character designs, and a look at the development of Last Mortal. Collects LAST MORTAL #1-4.

If you are closer to the Pasadena store, on the same day, at the same time, please stop by and help us welcome Gabriel Hardman (current Secret Avengers artist) and Corinna Bechko, the writing team on Boom Studios!‘ awesome PLANET OF THE APES series, and specifically for the release of EXILE ON THE PLANET OF THE APES #1.

EXILE ON THE PLANET OF THE APES Release Signing!
Week of March 7th, 2012