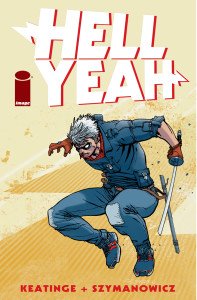 Before the crazy party at the Pasadena store later that night,  we are inviting you all to join us during the day (12pm – 3pm) at our Valley store for a really easy going meet and greet type signing with Joe. Talk to him about his projects or anything else in comics.  Joe started his career at Image Comics as an intern and eventually became their Marketing Director, until he decided to switch to the creative side of the industry. He’s got a ton of inside and many stories that he probably won’t share 🙂  We’ll also have a ton of  Glory and Hell Yeah comics, including some really neat EXCLUSIVE Items, like the Collector’s Paradise Exclusive Variant to Hell Yeah #1, pictured on the right. Come, mingle, check out the books and say hi to a very cool dude and a good personal friend, Joe Keatinge.

To RSVP for our Pasadena Party event, please visit the event’s FACEBOOK page HERE, and while you are at it, make sure to “LIKE” Collector’s Paradise on Facebook to find out more about our events.