You are here: Home › May Local Publisher of the Month: Top Cow!

It’s my true pleasure to announce that Top Cow Productions is our May Local Publisher of the Month!  We work with a lot of publishers, and are friends with all of them, but none offer the support in both product and talent like Top Cow.  Our customers have gotten to meet at our Release events people like Milo Ventimiglia, Jeremy Haun, Joe Benitez, Nelson Blake, Sal Regla, and this past weekend, Rick Loverd, Michael Broussard and the Top Cow founder himself, the tallest person in comics, Marc Silvestri.   Top Cow is gearing up for a company-altering event, ARTIFACTS, which will re-focus the company’s titles and create a very convincing and entertaining mythology that will make fans want to pick up all the Top Cow titles.  A 12 issue mini-series that will redefine the way you see Top Cow’s characters and create a cohesive reason for them to co-exist together as part of a shared universe.   If you are an X-men fan, this is an event for you.  If you like high concept fantasy and sci-fi, this is an event for you.  Give ARTIFACTS a shot with the free FCBD ARTIFACTS primer, ask us for a copy, we have plenty in stock. 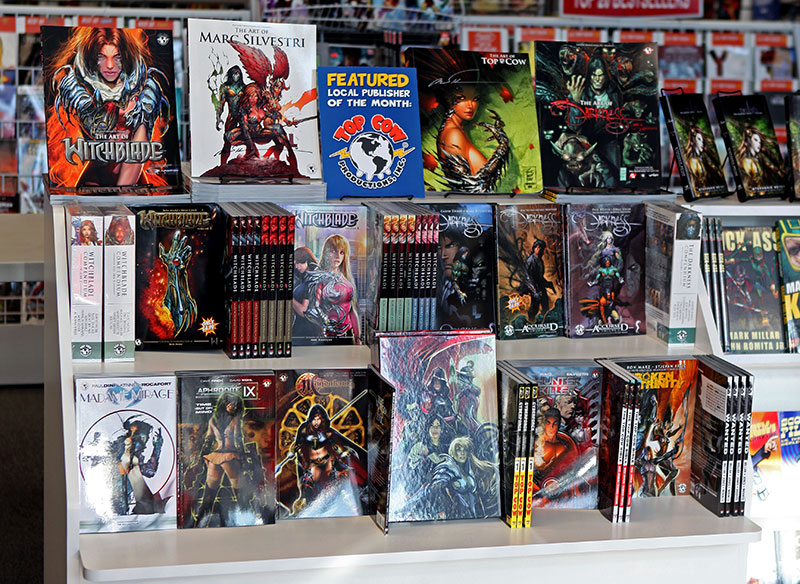 During initial stages of Image Comics, Marc Silvestri shared a studio with Jim Lee, where he created his first creator-owned comic, Cyberforce, as part of Image’s initial line-up. After setting up his own studio, Top Cow Productions, he expanded into other comics, launching Codename: Strykeforce, a new Cyberforce  series and various spin-offs.  The company attracted many professionals known across the industry,  and helped launch the careers of various writers and artists, such as Joe Benitez, Michael Turner and David Finch.  Top Cow was abandoning superheroes and moving into a darker subsegment, the fantasy genre. New properties were Witchblade (where Turner had his first big success) and The Darkness (where Marc Silvestri returned to artist duties). Thanks to the success of Witchblade, Top Cow was able to expand, adding to its line with titles that included The Darkness, Magdalena, Aphrodite IX, and others. Silvestri was heavily involved in training and developing new talent through the studio and Top Cow was known for a time for its “house style”.  In addition to company owned properties Top Cow has from time to time worked with creators to develop creator generated properties. These properties have included Turner’s Fathom which eventually ended up at Aspen Comics; Joe’s Comics, created exclusively for J. Michael Straczynski, which included Rising Stars, Midnight Nation, The Agency, and Obergeist.  Top Cow is also known for bringing Tomb Raider’s Lara Croft to comics, with various graphic novels written and drawn by some of the industry’s best known creators.